The Jackson Lake Dam is a dam located on the Snake River in the state of Wyoming, in Grand Teton National Park. The dam was built to provide irrigation and hydroelectric power to the surrounding area. The Snake River is the main water source that contributes to the lake, however other rivers like the Gros Ventre River also feed into it. The lake is approximately 18,950 acres in size. 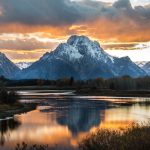 The Jackson Lake Dam is now a concrete gravity dam. However, the dam was originally a log crib dam, started in 1906, and completed in 1910. Unfortunately, the dam failed as the reservoir filled to capacity, so it had to be reinforced shortly after, finishing up again in 1916 as an earthen dam. It was then reinforced again in 1976 by the U.S. Bureau of Reclamation to make it withstand the possible earthquakes in the area, since the Yellowstone region is one of the most seismically active areas in the world.

Jackson Lake is actually a natural lake that existed before the dam was built, however, with the dam water levels rose approximately 22 more feet. The lake’s footprint is the remnant of large glacial gouging from the neighboring Teton Range, and is still fed by runoff from small glaciers near the peaks of those mountains. However, the main source of water is the Snake River, which flows into the lake from the North.

The power generated by the Jackson Lake Dam is primarily used to serve the immediate local area, including the towns of Jackson Hole, Wilson, and Teton Village. As for the water itself, the dam provides storage for irrigation purposes in the Snake River Basin in Idaho. The electricity generated by the dam is also often sold to other utilities in the region as well.

The Snake River has been designated as a Wild and Scenic River, which is a special designation granted by the US government to rivers that have natural, cultural, and recreational significance.

The Snake River is actually one of the longest rivers in North America, starting in western Wyoming, in the Teton and Gros Ventre mountain ranges. It flows for 1,078 miles through Wyoming, Idaho, Oregon and Washington before reaching the Columbia River near Walla Walla, WA.

Getting to Jackson Lake Dam

The Jackson Lake Dam is right smack dab in the middle of Grand Teton National Park between Signal Mountain Lodge and the Jackson Lake Junction on Teton Park Road.

The dam is located approximately 35 miles north of the city of Jackson, and 5 miles west of the Grand Teton National Park’s Moran Entrance. The dam is easily accessible from US-26/89/191 and other main roads that traverse through the park.

Visitors can also reach the dam by taking the John D. Rockefeller, Jr. Memorial Parkway, a scenic roadway that runs between Grand Teton and Yellowstone National Parks. Once at Jackson Lake Junction, turn right on Teton Park Road. The dam is 4 miles down the road from there.

Things to Do at Jackson Lake

Recreational activities that are allowed on Jackson Lake include boating, fishing, swimming, camping, and hiking. There are several boat ramps and marinas around the lake that provide access for boats and kayaks. Fishing is a popular activity on the lake, with species such as trout, mackinaw, and whitefish present in the lake.

There are various campgrounds and picnic areas surrounding the lake that are available for camping and picnicking.

There are many hiking trails around the Jackson Lake and the dam itself, many of them offer scenic views of the lake with the Grand Teton mountains set as a backdrop.