Visits to our great National Parks have risen over 75% since 1970. This despite only 11 new parks being added within that same timespan. Out of the new eleven, the most popular is Cuyahoga Valley in central Ohio at 34th most visited overall.

Overcrowding is a major problem for some of our most popular parks. Mitigation efforts have helped, but not all are popular. For every success story like Zion’s Shuttle-Only interior, we have the timed entries that add a major hurdle to some last minute summer vacationers.

The only real way to help the overcrowding at our top National Parks is to spread out the visits among other spots that are not as heavily visited.

We recently highlighted 12 parks that really should be reclassified as National Parks. And while we still stand behind our stance, the parks in that list are parks that can be visited now – “National Park” status or not.

The most visited parks always have something that visitors want to experience. Glaciers at Glacier National Park. Geothermic hotspots at Yellowstone. The grandest of all canyons at the Grand Canyon. We know why these parks are popular, everyone does. However, what everyone may not know is that there are similarly impressive parks that have way less visitors than those.

So for this list, we decided to find alternatives to ten of the most buys National Parks in the US. Some alternatives may be other lesser-traveled National Parks. Some are state parks or National Park Service sites. However, no matter what they are classified as, we guarantee the experience will still be just as amazing (and less crowded). 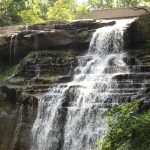 The Smoky Mountains is the most visited National Park in the country, and has been since at least the 1970s. The Smokies are known for their haze coming off the mountains in the morning, but the forests of the park feature old growth hardwoods and towering evergreens. Rock formations created from glacial activity millions of years ago dot the landscape to create trails that are easy for the whole family to enjoy.

However, because it is so busy (over 14 million visitors in 2020!), the place can be a little crowded. Gatlinburg, TN, the city in the center of it all, is very touristy. Next door in Pigeon Forge, it’s even worse.

Instead, you should visit Cuyahoga Valley National Park, located 530 miles (853 km) due north in central Ohio. Cuyahoga is only about 30 minutes from Cleveland, which makes it super convenient to get to, and the surrounding area has a ton of hotels, campsites and other amenities. Cuyahoga’s forests and hiking trails are very similar to that of the Smokies, although it doesn’t have the majestic mountains.

Both parks are free to get into, and being generally in the same part of the country, their weather also is very similar.

Zion National Park is truly an amazing place to visit. The canyons are magnificent, and it contains two of the most iconic hiking trails in all of the NPS system: Angels Landing and The Narrows. However, Zion has become so crowded over the last few years, that they shut down peak season car traffic through the park over two decades ago. The only way to get around the park now is by either hiking or riding their (also crowded) shuttle system.

Don’t get us wrong – Zion is still a place everyone should visit at least once in their lifetime. It was maybe the most awe-inspiring place I’ve ever visited. But if you’re not absolutely set on visiting here, consider Glen Canyon instead.

Vermillion Cliffs wilderness is also a great alternative to the uber-popular Antelope Canyon, which is also in Page. It has similar wavy slot canyons that Antelope Canyon is known for, but without the crowds. 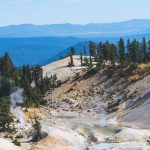 Everyone visits Yellowstone to see the geothermal features that the park is known for. Geysers, hot springs, mudpots, and stem vents bring millions of visitors to Yellowstone a year. It is the third-most visited National Park in the US. However, the crowds are only half the trouble. The cost to stay in the area is insanely high during the peak summer months, and are a real hit to your pocketbook if you aren’t prepared.

During the peak summer season, it’s very hard to even secure a place to stay within the park as well. Lodges inside Yellowstone regularly fill up 6 months in advance, so if you are looking to plan a summer trip to Yellowstone in April or May – good luck.

But if you aren’t set on seeing Old Faithful or Prismatic Springs, then consider checking out Lassen Volcanic National Park instead. Lassen has eight geothermic features within the park, including Terminal Geyser, Boiling Springs Lake, and Bumpass Hell. Bumpass is the largest hydrothermal area in the park, and is accessible via an easy 3 mile round trip trail.

Lassen Volcanic is one of the nation’s least visited parks as well. During the summer months, it averages around 100,000 visitors per month. 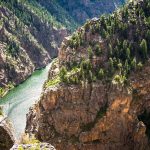 Nothing can compare to the grandeur that the Grand Canyon has. It is the largest and widest canyon in the United States, living up to its name and then some. The Grand Canyon is 6,000 feet deep at its deepest spot, and the average depth is 1 mile. It is also 18 miles wide at its widest point, and stretches a total of 277 miles long.

However, if you plan on visiting the South Rim of the park in the summer, prepare for something else huge: the crowds. The Grand Canyon is the 4th-most visited National Park in the US, and it averages over half-a-million visitors per month during its peak season.

While there is no substitute for what the Grand Canyon has, the Black Canyon of the Gunnison National Park does its best. Located in southwest Colorado, the Black Canyon was carved by the Gunnison River its sides are deep, steep, and narrow. The views from the top are awesome, and the East Portal Road descends to the river below.

While the Black Canyon is a much smaller park when compared to the Grand Canyon, it is still very impressive. Its deepest spot is 2,722 feet deep, and it stretches 48 miles long.

The Black Canyon is also much less visited. During the summer months, only around 50,000 visitors show up per month.

The Rocky Mountain National Park (RMNP) has gotten so crowded that it recently introduced a timed-entry system from May until October. This means that if you didn’t reserve a timed ticket, then you can’t visit. This is because the park is the nation’s 5th-most visited National Park. During the busiest month in the summer, nearly one million visitors show up to see what this park has to offer.

However, the Rocky Mountain Range is huge. It stretches from the top of Canada, all the way through Colorado and into New Mexico. This means that there is a ton of places to see the Rockies that do not include the actual National Park.

The White River National Forest is our favorite alternative to RMNP. At an astonishing 2,285,970 acres, it is the largest national forest in the nation. It also happens to be the most visited national forest, but that is likely in part due to the 12 ski resorts within its boundary. Aspen, Vail, Breckenridge, and Beaver Creek are just some of the Colorado ski resorts that call the White River Forest home.

The White River National Forest also contains 8 Wilderness areas, 2,500 miles of hiking trails, and 10 peaks of 14,000 feet or more. It is located about 1.5 hours from downtown Denver (same as RMNP), and is more than four times its size.

Acadia is the nation’s 6th-most visited national park, which is largely due to the fact that there are simply no other national parks in the Northeast. Acadia sits on the rugged shores of the Atlantic Ocean, and it is this seashore that brings the hordes of visitors.

However, if you aren’t tied to seeing the ocean, then consider Baxter State Park, which is a short 2 hour drive north of Acadia. While these two parks aren’t terribly similar, amazing times can be had at both.

Baxter State Park is located in northern Maine, and has 209,501 total acres, making it the largest state park in the state by a wide margin. Katahdin Woods and National Monument was established in 2016 by President Obama right next to Baxter on the more than 87,500 acres. The two parks side-by-side offer miles of trails, and its highest peak is the northern terminus of the Appalachian Trail. 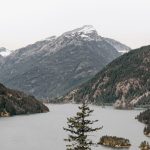 I have to believe that the only reason Glacier National Park is so popular is because of the term ‘glacier’. It is not easy to get to (the closest large airport is 5 hours away), and is crazy busy during the short time period it is fully open in the summer. Lodges inside the park are fully booked over 6 months in advance.

What may not be known to everyone is that Glacier National Park is not the only place to see glaciers in the US. In fact, it’s not even the easiest place to see them. Our choice for an alternative to Glacier is the North Cascades National Park.

Located about 2 hours from Seattle, the North Cascades is virtually never visited. Out of the 63 national parks in the NPS, it ranks third-lowest in total visitors.

There are over 2,000 documented arches in the Arches National Park, which also has pinnacles, balanced rocks, fins and other geologic formations. Arches has becomes such a popular summertime destination, that they have recently implemented a timed entry system where visitors have to reserve their spot in the park for a specific date and time. While Arches NP is only the 16th most visited, its small area makes it the 43rd largest national park in the US. This small footprint is the main cause of the congestion.

A great alternative to Arches would be Natural Bridges National Monument, 120 miles to the south, but still in Utah. The monument protects three natural bridges: Sipapu Bridge, Kachina Bridge, and Owachomo Bridge. In 2017, it was also designated as the first International Dark Sky Park in the world.

There are, however, a few minor differences between an “arch” and a “bridge”. A natural bridge is a natural stone arch that spans a valley of erosion, whereas an arch does not span an erosion valley. Natural Bridges National Monument as three true bridges spanning an erosion valley. All of the popular tourist attractions at Arches National Park showcase true natural arches.

Natural Bridges National Monument sees less than 75,000 visitors a year, making its yearly total less than one third of what Arches sees in its busiest month (June). 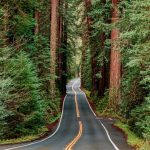 Sequoia is not the only place to see giant redwood and sequoia trees in the US. In fact, the largest trees also have a massive presence in Redwood National Park rather than just the much more popular Sequoia National Park.

While Sequoia has about half of the world’s largest 30 trees, the giants in Redwood are nothing to scoff at. In fact, the world’s tallest tree is Hyperion, located in a remote part of the Redwood National Park.

Redwood National Park stretches 40 miles along the Pacific Coastline in Northern California. The massive coastal redwoods, or Sequoia sempervirens, grow along the state’s rugged north coast. This area is home to the National Park along with numerous state parks such as Prairie Creek, Del Norte and Jedediah Smith.

While the state parks require an entry fee, Redwood National Park is free to get into. Redwoods also only sees about one fourth of the amount of visitors that Sequoia does during the summer rush.