Glacier National Park Through the Seasons

Glacier National Park in Montana is America’s tenth most visited national park, and is home to about two dozen active glaciers.

What is the Best Month to Visit Glacier National Park?

Based on our research and data, the best month to visit the Glacier National Park is September. September is the sweet spot where most of the park is still open, yet the crowds have started to die down a bit from their summer peak. 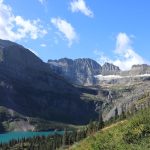 With services limited in the spring months, visitors need to plan ahead and be self-sufficient. Most services in and near the park do not reopen for the season until late May or early June. Most accommodations in and around the park are also very limited during Springtime.

Higher elevation trails can be dangerous and snow-covered until around late June.

The two summer months of Glacier National Park account for over 50% of the yearly visitors that come through the gates. This is an unbelievably busy time of the year, which makes finding a last minute room virtually impossible. Most rooms and camping spots need to be booked at least 6 or more months in advance.

The trails to-and-from the many glaciers in the park will become very busy with hikers.

Aside from the crushing amount of people you’ll encounter, at least the weather is very present. Highs during the day are in the very comfortable 70’s and lows usually stay well above freezing.

Fall is a wonderful time to experience Glacier National Park, but visitors at this time of year need to plan ahead and be self-sufficient. Generally, when the park is less crowded, the wildlife is more active, which includes bears. The trees are beginning to turn colors by mid-September, and last until the western larch (a deciduous conifer that loses its needles) turns yellow in mid-October.

The visitor centers close in late September and early October. Luckily for the few visitors that do show up at the park in the fall, the restrooms at the Apgar Visitor Center remain open year-round.

Crowds drop dramatically from August to September, and even more so come October. By October, Glacier NP sees less than one-tenth the amount of visitors as it did at its peak in July.

The fall weather at the park can be brisk-to-chilly. Daytime highs hover around the low-to-mid 50s and the lows at night drop into the 30s.

It’s a common misconception that Glacier National Park is closed in the winter. In fact, its open all 365 days of the year. However, services and park roads are severely limited or downright inaccessible during the winter season, which lasts five months. Accommodations are virtually non-existent around the park, which sees less than 20,000 visitors per month during the winter season.

Massive snowfalls force most roads in the park to close in the winter. The portion of Going-to-the-Sun Road from West Glacier to Lake McDonald Lodge is almost always plowed and open year-round, but most other roads remain completely inaccessible by vehicle.

Montana
About the author